The link to the previous article about the SEED funding:
http://www.peacerevolution.net/chill-news/topic-99969645/world-peace-initiative-foundation-has-been-awarded-the-seed-funding-for-africa-europe-youth-cooperation

Few months ago, Peace Revolution has received a SEED Funding from the North South Centre to conduct a project called “Africa Inspire”. The project is a documentary that aims at promoting peace across Africa by giving visibility to peace restoration in Kenya, as a role model. Though the documentary addresses the peace process leading up to 2013 Kenya’s Elections in comparison to 2007/2008 Post-elections violence, yet it doesn’t discuss politics! Instead the documentary features the role of youth and women through the use of technology and social media, art and yoga (inner peace) as effective tools in peace-building and conflict resolution.

Moses Mbajah, the Yoga instructor we have interviewed was the teacher who facilitated the morning yoga sessions during East Africa Fellowship that has taken place in Nairobi 5-7 September, 2013. We have eventually used the footage of Peace Revolution during the retreat to illustrate the role of yoga and meditation in healing, peace-building and conflict prevention.

Rose Wachuca and Joshua Ogure are both active Peace Rebels pursuing the Self-Development Program, who were part of “Africa Inspire” core team. They have tremendously facilitated my coordination, networking and life integration in Kenya for almost a month of daily shooting. Being Kenyan themselves, they beautifully shaped the idea of “Africa Inspire”. 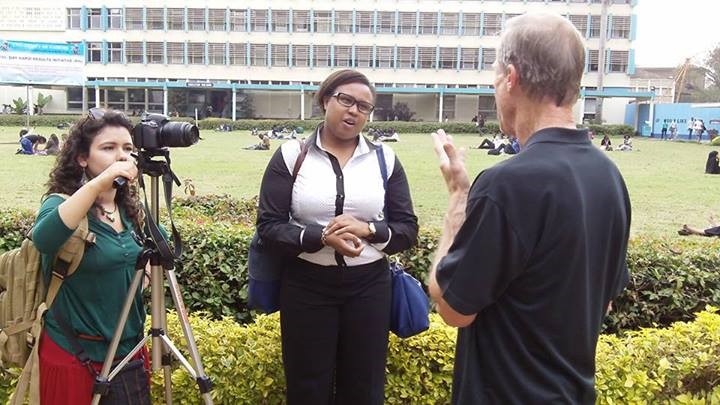 The shooting of the documentary was a great opportunity to network with youth led organizations, institutions and government officials. The networks we have reached were primarily from Kenya but also from around Africa such as Chantal Afou Bengaly from Mali working for the International Movement of Catholic Students and Jacques Sandrizi from the Democratic Republic of the Congo working for the World Scouts Movement.

Partnerships are the cornerstone for the success of peace work worldwide and so are important to spread the message of peace behind “Africa Inspire”. Accordingly, we have produced the documentary in partnership with Global Young Greens, Map Kibera Trust and the Network of International Youth Organizations in Africa.

The link to the Documentary: http://www.youtube.com/watch?v=keMcAYVosGs