The PIPO Newsletter For August 2013 - Planting The Seed

The PIPO Newsletter for August 2013

Greetings to everyone who is reading this article. It means that you are also curious about your existence to this questionable world. At present, we are all staying at the dangerous crossroads: the Middle East, North Africa, Sub-Saharan Africa and Central Asia. There is no beginning or the end to it. It seems the world has become full of defenders. But defenders to whom or what? Humanity? Independence? Equality? It is erratic just to think that we always need to defend or protect ourselves because we are all human beings living in one planet, having the same problems, worrying with the same one simple wish - to feel happy. So isn’t peace of mind all that we need?

If you ask people in many countries, what is Peace? They will probably say that Peace means no war, no fighting, and no bombs, whatsoever. But nobody talks about peace from the inside. Have you ever wonder why? Ajunwa Udochukwu, the Peace Agent from Nigeria, Kubwimana Venuste the Peace Agent from Rwanda, Mediatrix Masava the Peace Agent from Kenya and Aya Chebbi, the Peace Agent from Tunisia sat up this question a year ago, organizing PIPO on demand in Africa. They have built the firm platform to create the peace within everybody’s hearts. Here are some comments from the participants after the meditation sessions:

“It helps us to become aware of our thoughts before speaking”

“I get to listen to my inner feeling”

“I found the inner peace within me”

Not only that Peace Revolution has continued to teach these people how to find their inner peace from within, they are going to help people in Africa to find more inner peace in this coming September. Then, peace will spread all over the continent: East and West Africa. Thanks to the courageous lady Aya Chebbi who is pushing the cart to make it happen. The event is called, “African Regional Fellowships”, where 25 young people will gather together and meditate. According to her words, “We already have over 300 applications for East Africa and West Africa fellowships. Africans have a very strong will for peace and reconciliation, despite the conflicts and challenges they face on a daily basis, it's just that they need the tools and keys to sustain peace”. I am sure, these keys, which will be given by the kind monks, will open all hearts.

Connection between all parts of Africa probably is the most important in this continent. Having war, violence and extreme poverty, Africans will be able to connect not only with each other by creating networks, but most importantly to connect within themselves and their consciousness. By participating in these fellowships, as said Aya Chebbi, African youth will walk away from the experience with better understanding of their roles as individuals in peace with themselves in order to productively and efficiently give back to their communities. 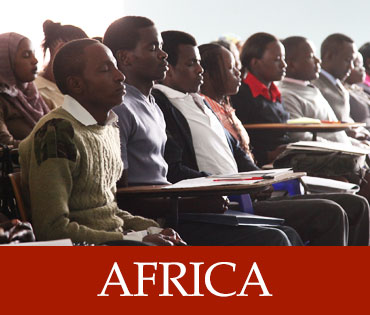 In other part of the world like Latin America, some wonderful event is already happening. Peace Revolution has started a meditation center in Peru called, "La Casa de Peace Revolution" which means, “Home of Peace Revolution”. It is remarkable that such a big event has happened so fast.

As LP John mentioned, “People are pretty much interested already in spirituality, finding inner peace and learn more about themselves. There is no need to talk much about the motivation of meditation. Many people have started their meditation already. All I did was to introduce a magic resting point of the mind, which is the center of the body. They could easily learn about it and could have good meditation right away”. This meditation center is for everybody who wants to meditate, or talk about meditations with the monks. Luang Phi John and Luang Phi Prakit will be in Lima until October 21st this year. This will be an amazing chance for people to get to know themselves better.

Besides adults, meditation is also popular among children. LP John has visited a girl school and hospital for sick kids to lead the meditation. According to his words, “All children can do meditation easily because their mind is still pure and clear. All of them felt very light and they felt no pain at all though they were sick at the hospital. They feel a lot of energy and could easily follow the step to imagine or visualize the sun. Eventually, they saw the inner sun as bright as midday. In Peru, it's rare to see the sun during this season, immediately after we meditated the sun was shinning. They were very surprised!” At this point, surprises hadn’t stopped. Children drew some pictures for monk.

And one of them said “I know it is pretty hot in Thailand. Thai food is very spicy. I met him (the monk) today. He looked calm. When he asked me to close my eyes, I felt as if I was floating in the sky."

Hopefully, the feeling of floating in the sky will stay within these children, as they are peaceful future for this planet.

The I Mediation Artistic Retreat

As a constructive and spontaneous process, meditation attracts many creative people: artists, film-makers, actresses, writers, designers and etc. Even the findings support that meditation can have a long-lasting influence on human cognition, including how they think and how they experience events. As a result, meditation can “turn on” the deepest layer of consciousness. Therefore, to intertwine meditation and creativity together, Peace Revolution is opening a special fellowship to artists from all over the world. The I Meditation Artistic Retreat will take place from January 14th - 27th, 2014 at a sanctuary, the most charming and unique place to be inspired. Participants will be able to promote their work in an exhibition for invited guests during the fellowship. Furthermore, after the Retreat ends, the Artists will start the opening ceremony of the Peace Revolution Art Gallery in Bangkok, where their artworks developed during the Meditation Retreat will be exhibited. Frankly, it is the first seminar that I have ever seen, where meditation and creation are interlaced. This means that the time of “inspiration by intoxications” is being removed and will be replaced by inner peace and calmness. Artistic Revolution is about to begin!

Also, in August, many new Peace Coaches have emerged: Natalie from Indonesia, Eleonnora from Kyrgystan, Ekaterina from Russia, Blanca from Chile, Dany from Colombia and Maryna from Beralus/Spain. It is wonderful and also impressive to see that most of the Peace Coaches this time are women As a keeper of family-bonding, women have congenital feeling of balance. So, for ladies, it is very natural to keep everything in peace. Barbara, a Peace Coach from Chile, comments in her peaceful demonstration, “If we, as society, focus on the objective of the protest, if we protest mindfully and don’t forget about why we protest - then protest will become peaceful and more effective. Because it will be not be surrounded by other feelings, like anger or dissatisfaction but it will be just for what it was planned: to build a better world”.

The idea of Building a better world is continued by Adriana Ramiraz, a Peace Agent from Columbia. She wrote an inspirational article about her journey to peace. Spending years of studying the causes of conformation and violence, one day she understood – the best way to help people is to keep her own sanity and hope in mankind. Simple and very effective. Another “revolutionary” lady, Ekaterina Kovina, Peace Agent from Russia, found her peace at the present moment. It appeared that they didn’t reinvent the wheel; they just came back to the nature of life. Coming back to simplicity is probably the most efficacious way to spread the peace.

In spite of the noteworthiness, the experiences they encountered in August were only the seed, which they all have planted. The real growing process is up ahead.

What lies ahead in September 2013?

In September, for the first time, Peace Revolution will organize its PIPO-on-demand event in Argentina, Buenos Aires, and Rosario. Thanks to Peace Agent Diego Romano and Peace Agent Ana Laura Lloveras. If you live in Argentina, come to learn the art of inner peace! Or if you aren’t – join us in Big International Day of Peace Event in Peru. It is also possible to watch the event online. And I wish all Africans fellowships good luck and hope that they will get to experience the memorable event that will start this September. Kenya will open the door of peace for Africans from 13th-15th September.

Peace to you all. From here, there and everywhere else around the world.
See you all in September
Peace Agent Ekaterina Kovina